Show, Don’t Tell: How to Write the Stages of Grief

How do you make your readers cry?

I promise this post won't be a downer. What it will be (hopefully) is really useful advice on how to portray the stages grief—and in the process, maybe encourage you to continue creating even during your own personal sorrow. 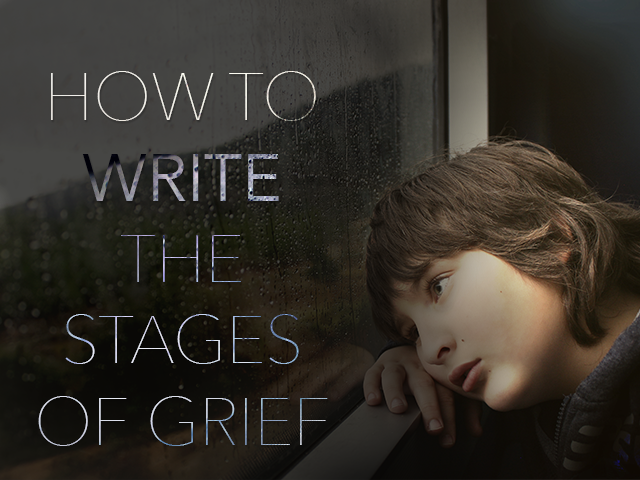 “We must embrace pain and burn it as fuel for our journey,” said Kenji Miyazawa.

Well, my friends: it's time to break beautifully.

“When artists break, they try to break beautifully. Sit, smile, and enjoy the pieces of a shattered soul.” – quote from Tumblr

Most of us have read stories portraying grief so spectacularly that we felt it as we read, weeping alongside fictitious graves.  Of course, most of us have also read stories with grief that utterly failed to move us, which (I think we can all agree) is something we'd prefer not to write.

The power of story largely resides in its power to evoke emotions. Our favorite works all tend to follow that path. We read about a heroine who succeeds against impossible odds, and we are bolstered by her courage. We read about the ridiculous antics of a teenage boy who's too smart for his own good, and we share both his embarrassments and his triumphs.

Empathy is the ultimate form of “show, don't tell.”

But in order to portray the stages grief effectively, we have to observe it. Grief is weird. It lingers. It colors everything and its symptoms change over time. Most importantly of all, grief leads to a particular kind of storytelling: finding the “why.”

To Write the Stages of Grief, Find the Why

At our hearts, we are all storytellers. It's part of the human condition to explain the world to ourselves in a way we'll accept. We rationalize. We imagine scenarios to help ourselves understand.

If your character has experienced past grief, then one of two things happens over time:

That “why” can be anything. Religious, scientific, poetic—we are terrific storytellers, down to our core. Here's a royal, real-life example:

“Grief is the price we pay for love.”

There's reasoning in there, a why.

The story she tells herself can grow hope or prevent it from blooming. It determines the choices she makes in the wake of her grief.

Homework Assignment: what story is your character telling himself?

BONUS: By the way, this can give birth to a really great plot-twist. If a decade after the fact, evidence comes to light that blows the survivor's rationalization to bits, then that survivor has a whole new set of motivations to carry your plot along. Boom: story.

How to Write the Stages of Grief

Along with that story, there will be symptoms of grief. These symptoms vary over the various stages of grief, and you should be aware of them as you describe your character's grief.

During the initial stages of grief, some or all of these might be present. Your character will not necessarily verbalize them; they could be happening “off-screen.” However, they will be happening, and that should make a difference how your character behaves – and how your readers empathize.

Long-term grief is very different from immediate grief. Even this short list is a little baffling:

Homework Assignment: How does your character handle grief in the long term? Do they embrace the cause of death, or run away from it? Has it shaped career choices?

If you want your character's grief to be powerful, you must learn to show it, not tell it.

You could say, “She cried,” or you could show that her nose is stuffed, that her eyes are simultaneously dry and leaking, and that her voice is hoarse.

You could say, “He had crazy thoughts of joining her,” or you could show by having him ask himself, “What if I'd been in the car with her? What if I had begged her not to drive while drinking? If only I'd taken her keys!”

When Grieving, Write On

Permit me to get personal before practice time.

The years of 2011 to 2012 were rough. One of my best friends died, followed by my grandmother, then the college professor who was basically a surrogate father, and finally, my own mother.

The causes varied wildly (aneurysm; age; hit-and-run; drowning).  The timing was insane (February 2011; June 2011; December 2011; June 2012). It seemed I'd barely recovered from one loss when another would cut the corner to hit me head-on. To say it took a lot out of me is analogous to saying there are a lot of cats on the internet.

The thing is, I had a debut book to finish. The Sundered was due to go public June, 2012. I couldn't afford to take time off creatively. I had to write through it, and I did that by focusing on what I experienced and pouring it into the page.

I wrote like a madwoman. Was everything I wrote good? Heck, no. No one will ever see most of what I wrote during that period (and believe me, you would thank me if you knew).

But am I glad I kept writing? Yes. A thousand times yes.

If you take nothing else from this article, take this: if you continue to create while you are grieving, you will survive it better.

It's not a “why.” It doesn't make the loss less bad; but creation, like growth, only happens when we are living.

Has your character experienced grief? Have you? Let us know in the comments section.

It's time to practice writing your character through grief. Take fifteen minutes and dive into the story they're telling themselves about this loss (the why), then post it in the comments section. If you share a practice, please comment on the stories of others.