The Ugly Truth About Self-Doubt as a Writer

Today's topic won't be a comfortable one. I'm going to address an issue I'm pretty sure you don't want to hear—but by the time I'm done, you'll be armed, better prepared, and stronger than you were. And what is this uncomfortable topic? Self-doubt. 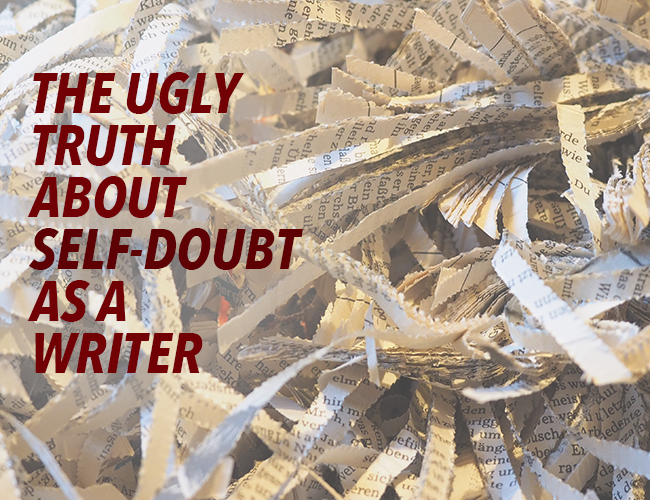 No matter what you do, your doubt as a writer will never go away.

Sound familiar? See if any of these feel like your hope:

The list could go on, of course. Right now, you may be thinking of your own if-then statement, and that's good. You need to face it.

Here's why: that if-then statement is a lie.

No, not quite. The self-doubt changes, lessens, and sometimes goes away. It also comes back. I need you to know that nothing you ever gain or accomplish will erase that doubt completely. I need you to know so that when the self-doubt hits, trips you up, bites the back of your neck in the middle of your successes and drains the confidence out of you, you will be prepared.

Writer's doubt does not mean you suck.

Writer's doubt does not mean you can't do this.

Writer's doubt is, in fact, a liar. Your self-doubt comes from your inner critic, who is, as we've established, a jerk. I know this from experience—and it's not only me. Check this out.

Every Writer Has Self-Doubt

I know I do. I'm a twice-over bestselling author, and I'm still plagued with doubts; I feel like I can't do this, that I'm going to be found out somehow as being “less good” than other authors, or less educated, or just somehow a fraud. The amazing thing is I'm not alone.

You know Neil Gaiman? One of the most celebrated living authors today? He's written books for adults, children, and anyone in-between. He's created graphic novels, scripts for movies and television, and won so many awards (four Hugos, two Nebulas, a Newberry medal, six Locus awards, and many more) that it should be really really clear he's a good writer. Right?

Surely not, you say. Well….

The problems of success can be harder because nobody warns you about them.

The first problem of any kind of even limited success is the unshakable conviction that you are getting away with something, and that any moment now, they will discover you. It’s Impostor Syndrome—something my wife Amanda christened the Fraud Police.

In my case, I was convinced that there would be a knock on the door, and a man with a clipboard (I don’t know why he carried a clipboard, in my head, but he did) would be there to tell me it was all over, and they had caught up with me, and now I would have to go and get a real job, one that didn’t consist of making things up and writing them down, and reading books I wanted to read. And then I would go away quietly and get the kind of job where you don’t get to make things up anymore.
—Neil Gaiman, Commencement Speech at the University of the Arts Class of 2012

You'd think that doubt would have gone away by the third Hugo, perhaps.

Not enough? How about we hear from Stephen King (twelve Stokers, three Locus awards—oh, you get the idea):

I'm afraid of failing at whatever story I'm writing—that it won't come up for me, or that I won't be able to finish it.
—Stephen King, Rolling Stone 2014 interview

You'd think being Stephen Freaking King might have slain that doubt-dragon, but nope. It did not.

Really, Every Writer Has Self-Doubt

Those two authors not your cup of tea? No problem. Here are a few more.

Dear God, I am so discouraged about my work. I have the feeling of discouragement that is. I realize I don’t know what I realize. Please help me dear God to be a good writer and to get something else accepted.
—Flannery O'Connor

Each day is like an enormous rock that I'm trying to push up this hill. I get it up a fair distance, it rolls back a little bit, and I keep pushing it, hoping I'll get it to the top of the hill and that it will go on its own momentum. I'm very deeply inculcated with a sense of failure for some reason. And I'm drawn to failure. I often write about it, and I'm sympathetic with it I think, because I feel I'm contending with it constantly in my own life.
—Joyce Carol Oates

Such fear of writing always expresses itself by my occasionally making up, away from my desk, initial sentences for what I am to write, which immediately prove unusable, dry, broken off long before their end, and pointing with their towering fragments to a sad future.
—Franz Kafka

I have been successful probably because I have always realized that I knew nothing about writing and have merely tried to tell an interesting story entertainingly.
—Edgar Rice Burroughs

The more scared we are about our calling, the more sure we can be that we have to do it.
—Stephen Pressfield

I seek strength, not to be greater than other, but to fight my greatest enemy, the doubts within myself.
―P.C. Cast

Writing is finally about one thing: going into a room alone and doing it. Putting words on paper that have never been there in quite that way before. And although you are physically by yourself, the haunting Demon never leaves you, that Demon being the knowledge of your own terrible limitations, your hopeless inadequacy, the impossibility of ever getting it right. No matter how diamond-bright your ideas are dancing in your brain, on paper they are earthbound.
―William Goldman

What to Do About That Self-Doubt

So by now, I hope you see the ugly truth: no matter what you do, that doubt will dog you. But that is not the end of your story.

Step one to facing writers doubt is acknowledging you're going to have it. That doesn't make you broken or weird or deficient. That makes you a writer.

I have previously given you this advice: “Write it anyway.” Guess what? You need to write it anyway. Don't listen to the doubt that tells you to quit.

Step two is giving yourself permission to write absolute garbage. Yes, this means what you write may be “all wrong.” In our worst moments, it's often difficult to figure out plot points and character arcs; what we write is just nonsense on the page, deletable, failing to develop characters or move the story in any way at all.

And that's okay. There is no such thing as wasted words. Words you don't use or have to delete are still not wasted. Every time you put words on paper, no matter how clumsy they are, strengthens you as a writer. No, you aren't practicing bad writing; you're just practicing writing. If you keep going, you will improve—even when writing crap.

And now for the really hard one: step three is the choice to believe a truth you cannot see.

Yes, that's faith. It doesn't have to be a religious word. All it means is choosing to believe in something you cannot, at that moment, verify.

There will be times you can verify it—good reviews or responses from beta-readers, good moments when you write something and know it's just right, great moments with your writing group in which they understand exactly what you were trying to say. During those times, you can see the truth: you are a writer, and you are getting better, and if you keep going, the story you're trying to tell will take shape.

When doubt hits, you can't see that truth. When writer's doubt dogs your heels, bites your neck, hides the sun, you can't even feel that truth. That's the moment to hold onto it—even though it doesn't feel real anymore.

The way I handle this is to write a manifesto. Something like this:

The doubt will pass. It will also return. If you hang on to these three steps, you'll make it through.

“
Writing is finally about one thing: going into a room alone and doing it. —William Goldman
Tweet this
Tweet

Facing the Ugly Truth and Winning

It's that simple and that hard.

It's also worth it. If I can do this, you can, too. We're in this together, fellow writer. The doubt will return, but that doesn't mean you have to let it win.

How is your battle with writer's doubt going? What do you do to beat it? Let us know in the comments.

Ready for the challenge? Here it is: for fifteen minutes, work on your own writer's manifesto of the truths you will hold on to during those dark and doubting times.

For many of you, you haven't thought much about those truths yet. You may not be published, and may not have a support group or even encouragement from family or friends. That's okay. If all you have is the gut-deep knowledge that the story you have to tell is good, then that is enough. That instinct isn't wrong. If you want to read the thing you want to write, other people will, too.

Take that fifteen minutes and work on your manifesto. Make sure it's truths you can hold on to even when you can't see them. Doubt is coming; that means you'll get the chance to kick it in the behind.

When you're done, share your manifesto in the comments. Remember to leave feedback for your fellow writers—let's spur each other on to out-write our doubt.